LOCATION ON THE PLANNED ROUTE (II)

In the midst of preparations for the new nautical season, we have chosen not only an interesting but also a very important topic: “All about a safe mooring”. Although this was the (sub) topic of many articles in our magazine, we have decided to dedicate space to it again through a series of articles, entrusting the helm to naval engineer and famous seadog Jack Šurija.

In the previous issue, we said that the knowledge and skills for choosing the location and type of berth, as well as the procedure of mooring a boat belonging to the practical nautical knowledge, i.e. – good maritime practice.

Acting according to the principles of good maritime practice

Acting according to good maritime practice is also taken into account during the trial on estimating responsibility in the event of an accident at sea, both in the investigation and assessments of a court expert witness, as well as when determining guilt in court proceedings.

General principles of dealing with good maritime practice are care, sequence of actions, conscientiousness, and responsibility. Above all, the most important thing in every situation is to act according to common sense, because the sea is impossible to mold. Circumstances may require a change in the order of some actions or the omission of some of them. Therefore, before any decision on the actions of a procedure that you intend to perform, an assessment of common sense will be indispensable.

In these lines, I do not intend to discuss the attractiveness of possible itineraries on our beautiful Adriatic, but only to show concrete, applicable knowledge and basic principles of action in achieving safety of the crew and boat at berth at any location. Following the principle of good maritime practice, the choice of the location of berths or anchorages starts at home (!), while planning the itinerary, but it to be rechecked with each morning coffee on board. The first and indispensable step in that check is to read the weather forecast for that day. Of course, with readings focused on the planned sailing route and stop points.

How to read the weather forecast correctly? Fortunately, it is very easily accessible today. There are numerous applications for mobile phones, tablets, or laptops with which we can easily have a forecast on board. However, it is this spectrum of various forecasts that gives us a false feeling of safety, because they are usually very incomplete. Most often, they are not adjusted to seafarers, unlike the official weather forecast, such as the one of the Maritime Meteorological Center Split of the State Hydro-Meteorological Institute.

We need to make the right decision about a secure mooring based on state forecast data analysis that gives a complete weather picture over a wide area and individual mobile applications, which provide a forecast for a very small area.

State Hydro-Meteorological Institute (SHMI) forecasts are the best, BUT you need to know how to read them or interpret them correctly.

What is it about? The units of measurement in the official SHMI forecasts are knots and they indicate wind speed, while the state of the sea is marked according to the Dauglas scale from 0 to 9. When it is stated that a wind speed of 35 knots is expected, it means that the wind speed is 35 miles per hour, i.e. 64.8 km / h or 18 m / s. The vast majority of skippers understand this information. The problem arises when describing the state of the sea when it says “the sea in the northern Adriatic is somewhere 5 …” According to the Dauglas scale, this is an average wave height of 2.5 to 4 meters. We also find in the SHMI forecasts that the wind is described as e.g. moderately strong, fierce, strong stormy, etc. Here we have to look at the Beaufort scale which says that it is a wind of 5, 7, 9 Bf or 19 – 24 knots, 32 – 38 knots, 47 – 54 knots. The sea is sometimes described as “moderately wavy”, which corresponds to the state of sea 3 on the Douglas scale and an average wave height of 0.5 – 1.2 meters.

It may seem to a layman that it is a great confusion of units of measurement: knots, the Beaufort scale, the Dauglas scale, but these are maritime customs at work. In mobile applications, the wind speed forecast is most often expressed in knots and the wave height in meters.

(to be continued) Jack Šurija 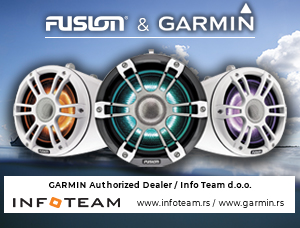